Transcendence is a game of exploration and space combat. You pilot a small starship through a vast and dangerous galaxy, encountering friends and allies, and acquiring unique and powerful items to upgrade your ship.

The universe of Transcendence is randomly generated. Though some important locations are fixed, the vast reaches of Human Space are different from game to game. Consequently, this player's guide can only give you general knowledge that might be useful in your travels. 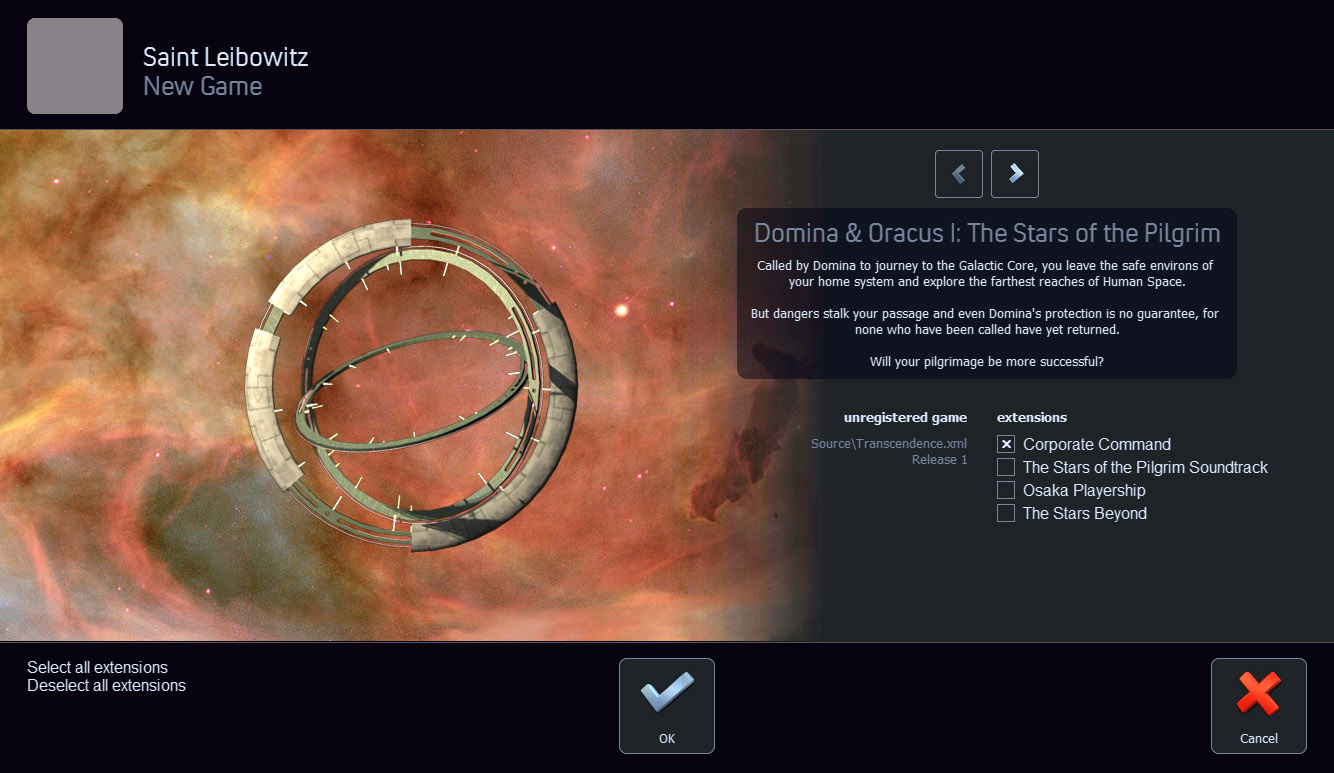 When you start a new game you will be asked to choose an adventure. The core adventure, which comes free with the initial download, is called The Stars of the Pilgrim. Other adventures will be available for download on the Multiverse.

In this guide we will assume that you have chosen The Stars of the Pilgrim. 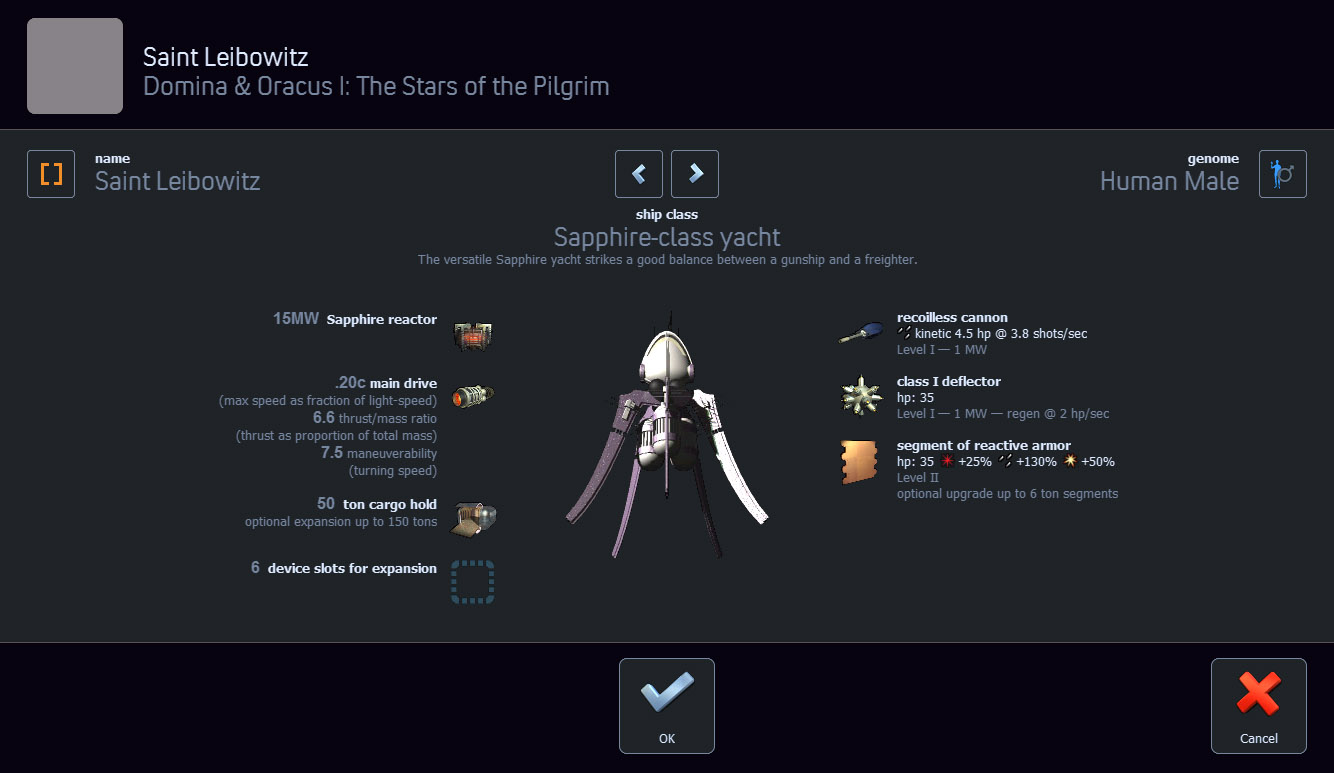 To play you must choose a starting ship class. In Transcendence your ship is your avatar: you will upgrade it, repair it, enhance it, and refuel it on your way to the Galactic Core.

In the core adventure you may choose one of three ship classes. Slow and boxy, the EI500 freighter is terrible at dogfighting but comes equipped with a 200-ton cargo hold. In contrast, the Wolfen-class gunship is fast and deadly, though it is somewhat limited in the range of device upgrades available to it. Somewhere in the middle is the Sapphire-class yacht: You may use it for trading or for fighting, but until you upgrade it, the Sapphire will underperform both the Wolfen and the freighter.

The freighter is probably the best starting ship for beginners, but no matter which ship you choose remember that most of the difference between the classes lies in the set of starting devices. The freighter starts with an omnidirectional laser, but there's nothing stopping you from installing one on the Sapphire (other than money). By the time you get more than a few systems deep, you will have replaced every single one of the starting devices.

When you start the game you will see your ship appear in the center of the main screen. You are now in control of your ship—you may fly around the system, fight enemy ships, and dock with friendly stations.

The main screen is a top-down view centered on your ship and extending out to around 16 light-seconds. Four instrument displays are arranged at each of the corners of the screen, as shown below: 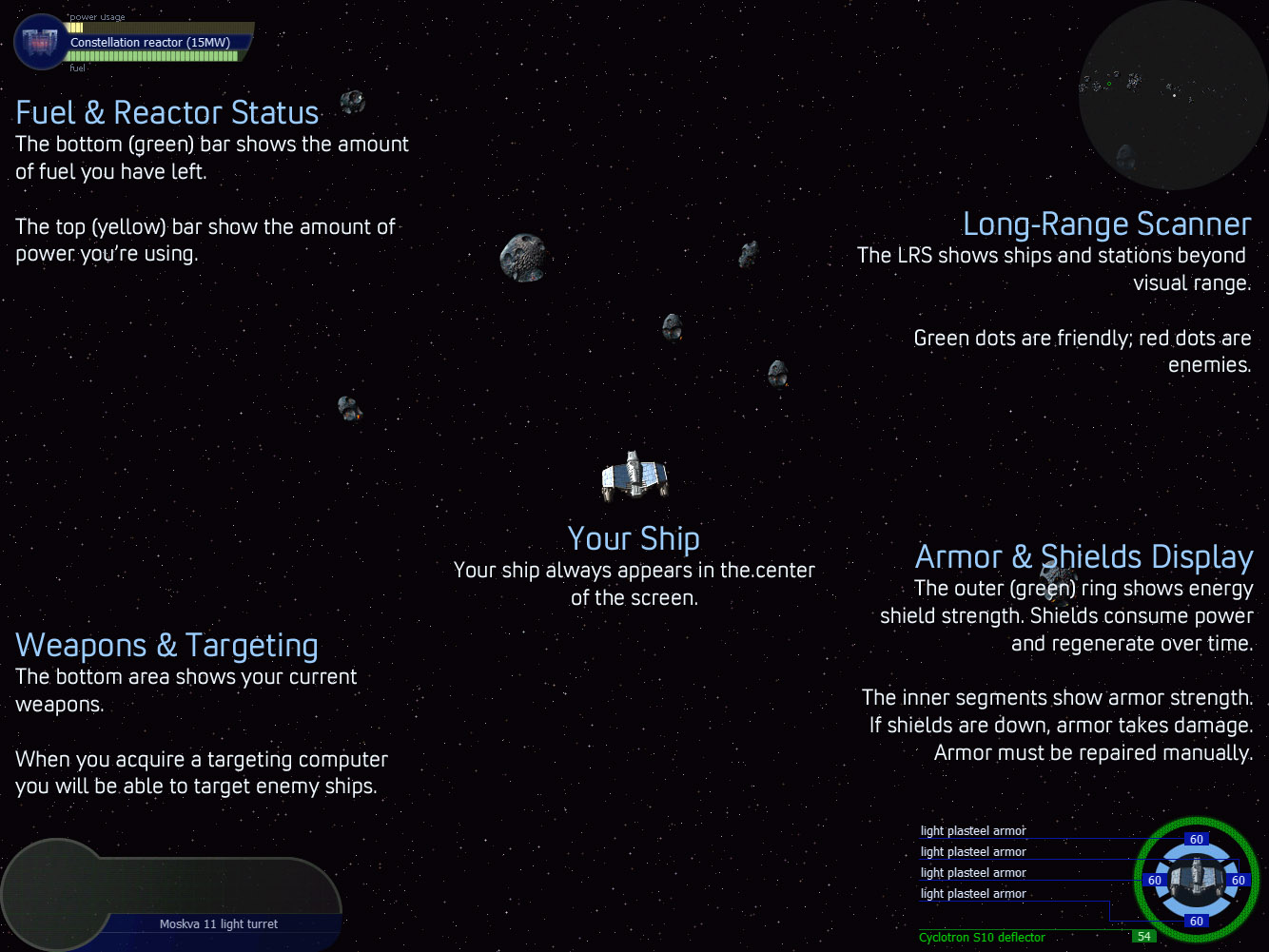 At the upper-right of the screen is the long-range scanner. It shows ships, stations, and worlds around you out to 100 light-seconds. Friendly objects are green; enemy objects are red.

The lower-left corner shows the weapon & targeting display. The bottom part of the display shows the status of your currently selected weapon and launcher. If you have a targeting ROM installed, the upper portion shows information about the selected target.

The upper-left corner contains fuel & reactor status. Every device installed on your ship—weapons, shields, etc.—draws power from your ship's reactor. The top (yellow line) shows the current amount of power being drawn (as a percentage of the maximum reactor output). If you install upgraded devices that draw more power, you may need to install a larger, more powerful reactor. The bottom (green line) shows the amount of fuel remaining. Your reactor consumes fuel in proportion to the power being generated. 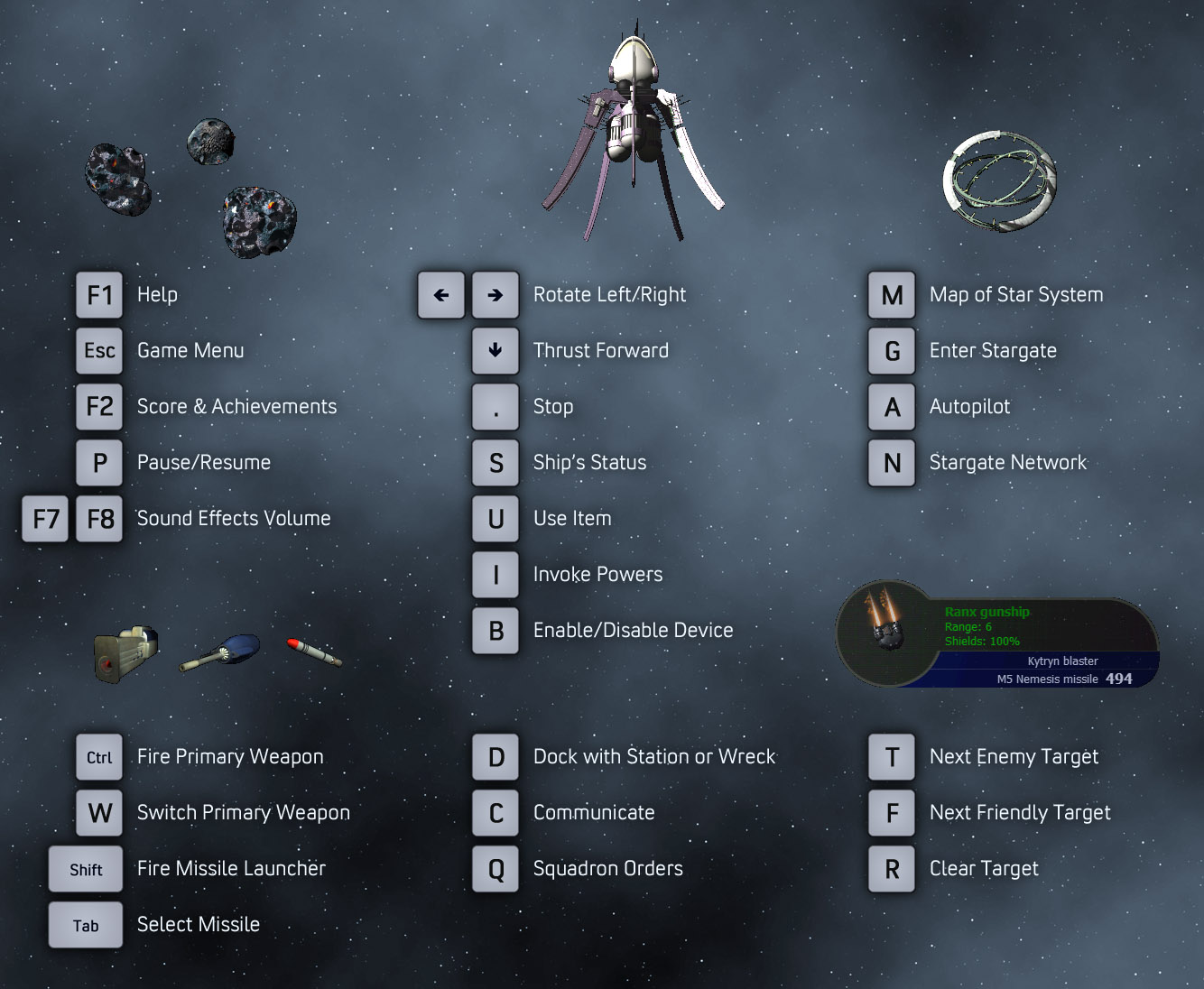 At any time you may press [F1] to get a list of commands. Press [Esc] to bring up a game menu, allowing you to save and exit the game.

Now that you know your way around your ship, you can begin exploring. Press the left and right arrow keys to turn your ship; press the down arrow key to thrust forward. Without significant friction in space, your ships keeps moving even after you stop thrusting. Turn the ship around and thrust in the opposite direction to slow down. Or press the period key (.) to decelerate. 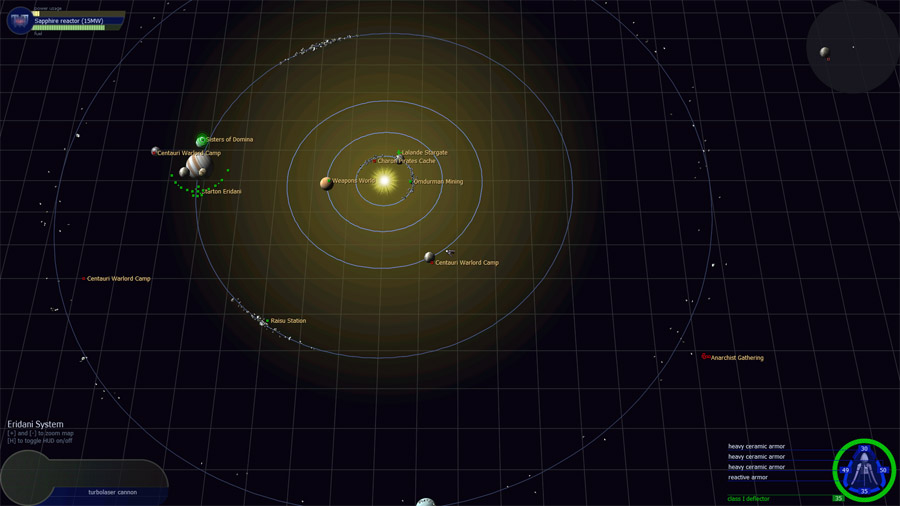 Press the [M] key to show a map of the entire system. Like your other displays, the system map shows your ship at the center. The map shows worlds and major stations. Stations, however, are only displayed if you have encountered them (or otherwise have some knowledge of them).

If you find a station you may dock with it to interact with it. For example, docking with a Commonwealth Colony allows you to buy and sell items and to repair and refuel your ship. If you dock with a piece of wreckage or an abandoned container you may loot any items inside. Press the [D] key to dock with the nearest object.

When you're traveling long distances, you may want to engage the autopilot (using the [A] key) to make time go by faster. Pay attention, however, as you might encounter enemy ships while en route.

When you do meet enemy ships (and you quickly will) you'll need to maneuver to avoid their shots and aim your weapons. Use the [Ctrl] key to fire your primary weapon. The EI500 freighter has an omnidirectional laser that will automatically aim at your nearest target. But the Sapphire and Wolfen must be aimed manually by turning your ship to face in the proper direction.

The Wolfen also has a missile launcher. Get close to a target and press the [Shift] key to launch a missile. Unlike most weapons, launchers have a limited supply of missiles; you will need to acquire more missiles if you run out. Neither the freighter nor the Sapphire start with a missile launcher, but you can always buy one and install it.

Most missile launchers can fire more than one type of missile. For example, the NAMI missile launcher is compatible with a wide range of missiles of varying power and capabilities. The weapon & targeting display shows the currently selected missile. To switch missiles, press the [Tab] key.

You may also install additional weapons on your ship. For example, you might install a slam cannon on the freighter to complement the omnidirectional laser. Use the [W] key to switch weapons.

The selected target is automatically used by your weapons. For example, an omnidirectional weapon will always aim for the selected target (something to be aware of, if you happen to have a friendly ship selected). 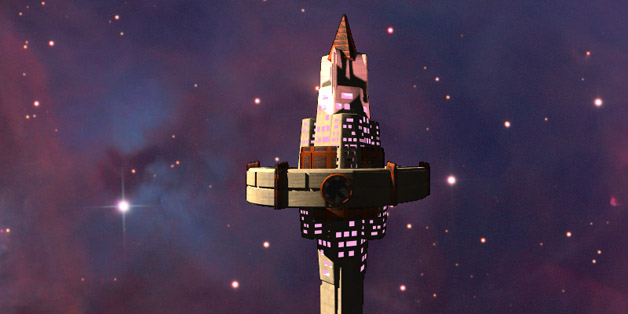 Domina summons you to the Galactic Core and in times of need you may be able to call upon her powers to help you in your journey. Press the [I] key to invoke a power. At first the only power you will be able to invoke is Sustain. When invoked, Sustain creates a temporary energy field around your ship that protects you from harm (though it also prevents you from firing your weapons). As your connection to Domina strengthens, you may have access to other powers.

Visit a the Sisters of Domina to learn more about Domina and to strengthen your connection with her.

Your shields, weapons, engines, and other devices consume fuel. When the reactor runs low on fuel you may press the [S] key to bring up the ship's status display. From there you may refuel the reactor using fuel items in your cargo hold. If you do not have any fuel in your cargo hold, you should find a friendly station that sells fuel. Most Commonwealth stations have refueling services.

If your armor is damaged in battle, you may repair it by docking with certain friendly stations. For example, Commonwealth Dry Dock stations provide armor repair services, as do Corporate armor dealer stations. You may also find or purchase certain items, such as armor patches, that you can use to repair your own armor. If you have such an item, press the [U] key to select an item in your cargo hold to use.

Some enemies will attack you with weapons that do more than just damage your armor. Sapiens, for example, have radiological weapons that contaminate your ship with radioactive waste. If your ship is contaminated you should head for the nearest Commonwealth station for decontamination. Other stations may also provide decontamination services—though all will charge you for the service.

Upgrading devices such as weapons and shields often requires dedicated docking facilities. Major Commonwealth stations as well as some Corporate stations provide device installation and removal services. Remember: your ship can only support a limited number of devices, and every device consumes some amount of power.

Your ship is capable of traveling to any destination within a star system, but to visit another star you need to take advantage of the ancient, alien network of stargates. Since the discovery of the first stargate, hidden among the icy asteroids of the Kuiper Belt, we have traveled to and colonized dozens of star systems, each connected via these massive alien constructions. When you find a stargate, press the G key to enter the gate.

Your journey will be long and dangerous, but you will experience the full diversity of the Galaxy and acquire technological wonders of immense power. Every system you visit will bring you closer to your goal. Remember what you have learned and you will survive to reach Domina at the Galactic Core.

Alone at the edge of Human Space, a Viking-class gunship approaches. Mistaking you for a harmless craft, the Viking attacks, but its thin hull is no match for the blast of your slam cannon.

Looting the Viking's wreck, you consider your path. The next system is filled with Slavers and your armor needs repair. Push on towards the Core or backtrack to a safe port?

Domina awaits you at the Galactic Core and with her hangs the fate of the Galaxy. Will her powers be enough to overcome the ancient malevolence known as Oracus? And what role will you play?

Leaving the floating wreck behind, you thrust towards the stargate at the edge of the system.

Download
Twenty Things to Do
Map of Human Space
FAQ